I’ve told you before about Kwik Stix from The Pencil Grip, and if you’d like to refresh your memory, please click here!

Well, there is a brand new product which has come out! It’s called Magic Stix Washable Markers. They are available in both 12 pack and 24 pack, and boy, are the colors ever pretty! 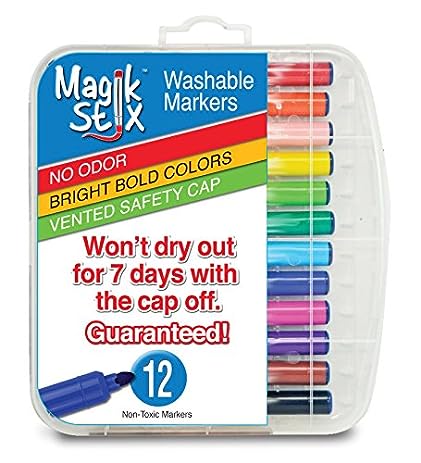 These can be used to make any number of beautiful things! Here are just a couple of examples:

I can hardly wait to see what my own kids come up with!

I received a free product from the Pencil Grip Co. in exchange for this promotional post. I am disclosing this in accordance with FTC regulations.

New Place to Get Kwik Stix!

My boys and I have just loved both the Kwik Stix and the Thin Stix  from The Pencil Grip, Inc. company.

When we reviewed them in the past, the boys had a blast!  You can read about that here, and see just how much fun they are!

Well, I have good news for you if you live near a BJ’s Wholesale Club! You may now purchase this wonderful product there, at the very good price of $19.99 for the 24 pack! This is a great deal!

You can see how nice all of the colors are, and they do not lie when they say it dries almost instantly. If you read my previous reviews, you’ll see that I was skeptical at first, and then extremely surprised and pleased! Do run right over to BJ’s Wholesale Club and get them. Remember, Christmas is coming, and it never hurts to shop early! 🙂

When I review a product, I often receive free product in exchange for an honest opinion expressed on this blog. I am not required to write a positive review, nor am I additionally compensated for these reviews. I share my opinions, and the opinions of my family, of these products. I am disclosing this in accordance with FTC regulations.

Two of my boys have been playing around with a new addition to the Pencil Grip, Inc. company, which we were given for the purpose of this review. They have been creating art with this company’s new product, the Thin Stix 6pk of Classic Colors.

We had previously reviewed an earlier product from The Pencil Grip, Inc., and absolutely loved it, so when this opportunity came up, my boys really bugged me to apply for it!

When we reviewed the original Kwik Stix, my son “Mr. Loquacious” really enjoyed them, however, he had me say in the review that he wished the company would make them even thinner, so he could use them for more detail. Well, they did, and now we have Thin Stix! He is asking now though, if the company would please go even thinner, more like the thickness of a crayon. Not too demanding at all, this child of mine!

Here he is, showing what he has named “The National Flag of Kids”

Hey, the way *I* see it, at least this time around he was not hampered by a sling on his dominant arm, lol!

“The Artist”, as when we reviewed the Kwik Stix, also really likes this product. He loves drawing very much, and I love the no mess aspect of this product! Here are just a couple of the drawings that he likes the best:

The Thin Stix 6pk of Classic Colors, like their thicker brothers, the Kwik Stix, are also actual Solid Tempera Paint, inside of a marker like container. My boys simply pop off the cap, roll up the paint as you would do with a glue stick, and paint their hearts out. After that, they roll it back down and put the cap back on, being sure to get it on tightly. It truly could not be simpler in any way!

Thin Stix, exactly the same as their thicker brothers, really is paint, but the reason *I* like it is that I am just not one of those “cool” homeschooling moms who doesn’t mind messy projects. I don’t know what it is, but I am always afraid the mess will become permanent damage.  Now, THIS paint is not like that at all! the pictures that “Mr. Loquacious” and “The Artist” are showing off above were painted on simple printer paper. First, the only one which had any curling was the flag that “Mr. Loquacious” made. Since the pictures that “The Artist” made are not heavy with paint, and did not cover the entire page, his did not curl at all. And they BOTH did indeed dry completely within 90 seconds, just exactly as the company claims the product will do. Gotta love that!

My kids are really enjoying this product, and I think they will continue to do so!

To read the thoughts of 99 other Review Crew Members and see some of THEIR artwork, please click on the banner below:

This has been a very fun review for us! We have been using the Kwik Stix 12 Pack from The Pencil Grip, Inc.  I am going to tell you right now, this is as far as I can remember during my time on the Review Crew, the very first time that when I opened a box with a review product in it straight from the mail, I had two kids quite literally attempting to pull it right out of my hands immediately, lol!

Of all four of my boys, the two who have really been the most interested so far have been “The Artist” and “Mr. Loquacious”, the aforementioned children who attempted to rip THIS

directly out of my hands, immediately after I opened the shipping box and they saw the following:

It was too funny! I had to make them let go, just so that **I* could take a look at it!

I’ll be honest, I had my doubts about the quick dry claims.

I was worried enough that I considered putting newspaper down on my kitchen table before allowing them to use them, but they got ahead of me. “The Artist” used some pages out of his sketch book:

And “Mr. Loquacious” used a pad of newsprint that I had purchased from a scrapbook store which was going out of business.

“Mr. Loquacious” did a different picture a while back, but wouldn’t let me use it. He wants me to let The Pencil Grip, Inc. know that he wants them to make these in a way that would allow for detail work, lol! However, since he’s stuck in the house after an injury, he got the Kwik Stix out and did this picture for the review. 🙂

By the way, it did not matter one bit whether or not I put down paper first, these Kwik Stix truly do dry super fast, and they did not bleed onto the back side of either kind of paper! How cool is that?
As you may have noticed in the shipping package above, The Pencil Grip, Inc. also included a sample Kwik Stix, as well as a sample pencil grip. My eldest, “The Batman” is my one child who has the most difficulty with writing and printing, because of his disabilities. He asked me if HE could use it, and review it for me so I would know from him how well it works.

“The Batman” is left handed like me, as you can see. Now, you can see in the picture how he needs to hold a writing utensil. The instructions for the pencil grip said to use it with the thumb on the letter L for left handed writers, and the thumb on the R for right handed writers. Unfortunately, “The Batman” had a lot of trouble using it with those instructions, however. He needed to reverse it, and put his left thumb on the letter R. It seems to work very well for him that way!

We are VERY pleased with this product, and think you would be as well, but don’t take my word for it, go along over and read what the other Crew Review members had to say! Just click the banner below, and it will take you to all of the reviews!

As always, I would just love to have you join me on all of my “Journeys Through Life”. Just enter your email into the subscription box at the top of the blog, and you will be notified whenever there is a new post. Hope you join us! 🙂