As a member of The Schoolhouse Review Crew, I was given an opportunity to review one of several Art Projects DVDs from See The Light. Even though there were a number of good choices, I had no trouble at all deciding what would be a good fit here, and chose Art Projects: Cartooning with Pat Knepley for “The Artist” to work through, because he can often be found curled up somewhere with paper and pencil, drawing something. 🙂 I was dead on with this one, too! When I told him I was filling out the interest form to request it, his reaction was an immediate “oh, I hope we get that one!”

As it turned out, “The Artist” was not the only interested child in this house during this review . . . “Mr. Loquacious” asked if HE could do it as well! Of course, I said yes, he was welcome to join in. 🙂 He did eagerly watch the DVD along with his brother, and did some of the assignments, however, he got bored with it part way through and quit. While he was participating, though, he did improve his drawing, and even went off the lessons to create his own idea at least once, which I will show with pictures later.

See The Light Art Projects is a series of DVDs that can be used as stand alone DVDs, or with the complete box set, as a school year’s worth of lessons drawn from the work of nine famous artists. As I said before, we chose Art Projects: Cartooning with Pat Knepley, but there are several other choices in the Art Projects line, all of which you can read about here.

The Art Projects: Cartooning with Pat Knepley DVD is an enjoyable way for anyone of any age to learn cartooning basics, though it is designed for anyone age 5 and up. With this DVD, you and/or your children will learn:

And you’ll learn these things with very little financial investment. All you will need to buy is the DVD, priced at $14.99. As far as supplies, you will need very little, most of which I would bet you already have around your home! From the website, the supplies needed are:

We already had everything except the special eraser, which “The Artist” ended up not even needing to use, he simply used his regular school eraser!

The instructor on the DVD was very personable, and seemed to be very easy to follow as she led the student in creating basic cartoons, using ideas as simple as different vegetables for characters.

Here is “The Artist” watching and creating along with the DVD . . .

Unfortunately, the one picture I managed to get of “Mr. Loquacious” did not turn out, so I can’t show it to you. However, I did get some photos of the work both of the boys did, and I CAN show them to you! 🙂

Ms. Knepley starts the student off with the first segment being devoted to creating parts of the face, showing how to make eyes, noses, and mouths in ways that will turn something as simple as the aforementioned vegetables into funny characters. Here is “The Artist’s” practice page . . .

And here is the one that “Mr. Loquacious” did.

She then continues on with making cartoon characters out of simple vegetable shapes, as I mentioned before. Here are some that “The Artist” did . . . 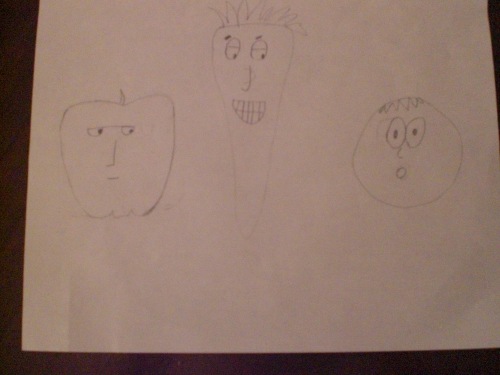 Next, Ms. Knepley had a segment on making cartoon faces. Here is what “The Artist” got from this part . . .

And, since “Mr. Loquacious” was still participating at this point, I have the page he did, as well . . . 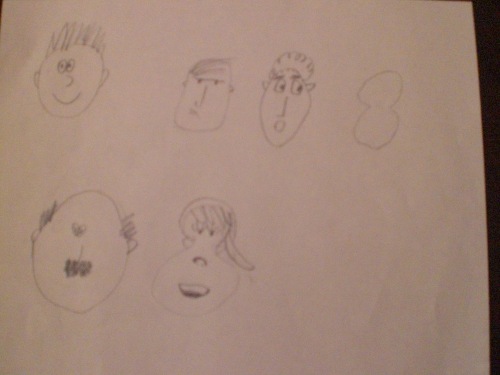 Next, the lessons go into drawing cartoon style people. These are “The Artist’s” practice pages . . . 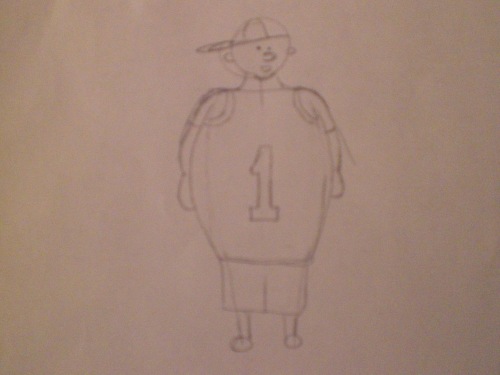 And since “Mr. Loquacious” was still participating at this point, I also have his practice drawings of cartoon style people . . .

It was at this point that “Mr. Loquacious” said he didn’t want to do the DVD anymore, and since I had not originally planned on having him do it at all, I figured that it was a bonus just having him doing any of it, and allowed him to stop. He did, however, do one more thing, he made a cartoon drawing on his own, using one of his toy cars, which you can see below. 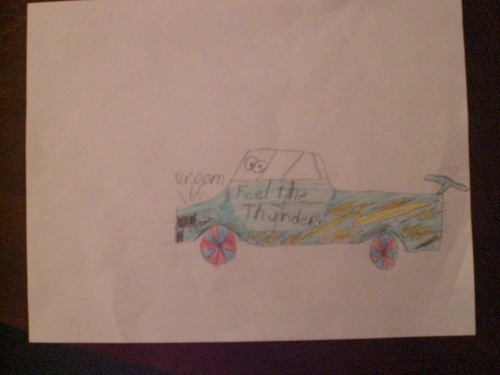 After learning to draw cartoon style people, “The Artist” went on to the segment on drawing cartoon style animals. Here we have what he did after watching that part of the lesson.

The final segment was on making a comic strip. Here is what “The Artist” did with it . . .

“The Artist” enjoyed learning how to do all these things so much that after following along with all the segments on the DVD, he went on and created his own characters using a variety of fruits and vegetables, as you can see below. 🙂 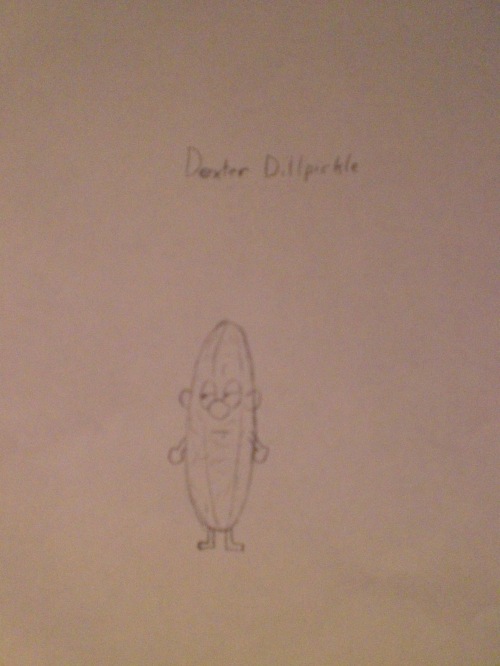 I asked “The Artist” to write down for me what he saw as the pro’s and con’s of the Art Projects: Cartooning with Pat Knepley DVD, and this is what he wrote:

I liked all the tips for cartoon speech and thought bubbles for when I plan to make my own comic.

So, overall, I believe this was a pretty good fit for us. I do think that “Mr. Loquacious” would probably have stuck with it to the end if, as “The Artist” pointed out, the lessons were actually separated into segments using a menu and chapters, instead of just one long lesson. The DVD is about 70 minutes long, which was just too much at one time for either of the boys. While “The Artist” was able to go back and forth and finish it, “Mr. Loquacious” became overwhelmed and chose not to finish. With that one change, I think this could be a really good set of lessons. I don’t know if the other DVD’s in this set are arranged as one long lesson the way that Art Projects: Cartooning with Pat Knepley is, but if so, then changing that is the one thing I would suggest to make the series just right. At $14.99, I think this would be a good fit for any homeschool family which includes a budding artist or two!

Check out reviews of this and other See The Light Art Projects by clicking the graphic below!

One response to “Cartooning with Pat Knepley . . . a TOS Review”