My eldest son, “The Batman”, was pleased to be picked for this review of New American Cursive: Penmanship Program Workbook 1 from Memoria Press . . .

He wanted to try it primarily because he has tried very hard all of his life to learn cursive writing. As my regular readers are aware, “The Batman” is age 22 now. He has a number of developmental disabilities, and it has really, really bothered him that he has trouble even writing his signature. He gets so nervous when trying to write, that he grips the pencil very tightly, and his hands become very sweaty. 😦 All that aside though, he said he wanted to try again.

This program, although designed (obviously) for someone MUCH younger, is a simpler form of cursive than I learned, and simpler too, than the cursive included when he was little and we were trying to use a purchased curriculum, and do what I now refer to as “school in a box”. Back then, both he and I were constantly, literally in tears over the handwriting issue, and that was before we even left printing for cursive!

I have to say, one of the first things that “The Batman” noticed was that the workbook was spiral bound at the top, rather than the side. He immediately realized that this meant that the spirals wouldn’t be pushing into him (he is left-handed) like regular spiral bound books. YAY! 🙂

The New American Cursive Penmanship Program was written by Iris Hatfield, who has a passion for handwriting, this program is very important to her. As you will read in the beginning of the workbook, she points out that the penmanship of American students has deteriorated over the past several decades. This program was created to help end this deterioration, by making cursive easy and fun to learn.

Throughout the workbook, there is a cute little mascot, Mr. Meerkat. The meerkat was chosen as the mascot because it is one of the few animals who are known to actively teach their young. So, why not have him help teach OUR children, hmmm? 🙂

Now, regarding how this workbook “works”. There is no “lesson plan” in which you are to schedule so much each day. There is a short teaching guide, in which you, the parent/teacher, are shown some very simple things.  You will teach the student (and you will want to remind him or her often until they have formed these habits) the three P’s:

On the same page which gives you this information, there are ideas for finding instructional videos on youtube for both right and left-handed students learning New American Cursive.

As the student begins to work on letter formation, you will help them by reminding them often of the three S’s:

Also in the short teaching guide is information about why it is important to use a multi-sensory method of teaching. It really helps the student to learn. When they say the letter, feel the letter (by writing it in the air, for example), and write the letter, they have actually put it into their brain in three different ways. Another wonderful suggestion given is to play light classical music when the student is ready to begin the actual writing process. I totally believe in this. I’ve read a number of things through the years which have convinced me that classical music is great as a background to studying, not to mention how helpful it is with someone like my son, who has broken connections in his brain.

We also like that after every few pages of work, there is a practice page which has extra space to either practice the letters, or to draw something. It makes for a nice break, especially for a student who is stressing out over handwriting.

By the time the student reaches the end of this book, he or she will be doing copy work such as The Pledge of Allegiance.

Because my son has difficulty with fine motor control, I’m pleased that this is a nice cursive, without all the extra loops and such that some cursive programs use. This is also helpful as ALL of my boys think “THAT kind of cursive is GIRLY, mom!” 🙂

I do like that this  workbook teaches the cursive letters in alphabetical order, though with the help of a software program (available on the Memoria Press site) called Startwrite/NAC, you can make up your own extra worksheets, tests, etc. I’m considering the purchase of  it, so as to create copy pages in topics we are studying, not to mention being able to help all of my boys with their cursive so that they can write neatly to family members and friends.

As I said way at the beginning of this review, “The Batman” is way older than the age this is designed for, but with his difficulties, this is where he needs to be. So far, it’s coming along well for him, and he likes it, so *I* like it! 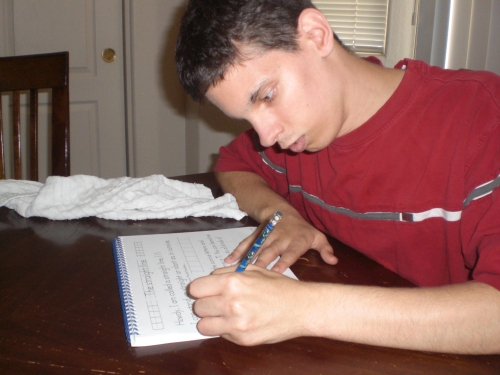 Please check out Memoria Press via the following social media!

To see what other crew members think of the New American Cursive : Penmanship Program Workbook 1 from Memoria Press, please click on the banner below! 🙂

As always, I would just love it if you would join me on all of “My Journeys Through Life”! Simply go to the “Sign me up” button at the top of the blog, and enter your email. Then you’ll never miss an update again! 🙂