I give my kids fake names on this blog having to do with their interests or personalities. Recently, we had a little party for “The Batman’s” 24th birthday. Now, as long as I can remember, ever since he discovered Batman as a very little boy, He’s been Batman crazy. He even carries around little Batman figures for different things . . . one for reading, one for watching TV, one for sleeping, and one to just carry in his pocket wherever he goes. 🙂 Well, a new friend of ours who happens to be a member of Heroes Alliance NM, and who portrays Batman as a member of this group, had planned to come for Alex’s party as a favor. Unfortunately, at the last minute he ended up stuck going to work at his “secret identity” job because a lot of people called off that day. 😦 However, being the great guy he is, he sent some replacement heroes, who were kind enough to come!

So, the birthday party!

And with Hal Jordan and his lady friend Tasha . . .

After pizza, Hal Jordan had to leave, but look! The Green Lantern showed up!

We’ve decided that Wonder Woman truly is a brave woman. When all the boys asked if she would have a mock battle with them, she agreed! They gave her a sword, and she let them shoot her with Nerf guns! 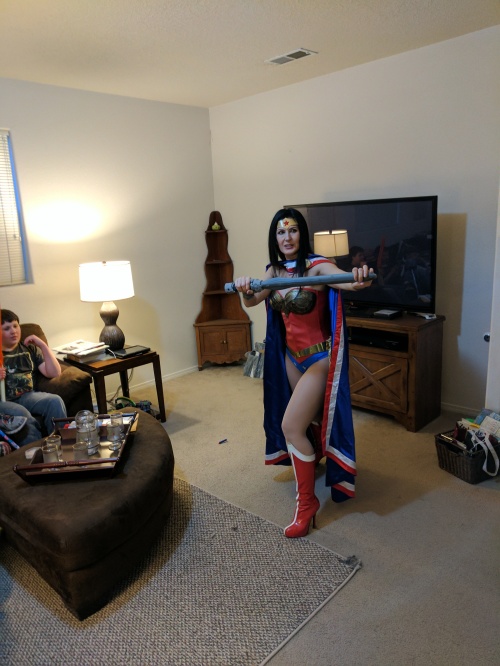 And our Batman, blowing out the candles!

One good pic of all the kids with our special heroes . . .

Now, the really cool thing in addition to this is that Batman came by about a week later, in his “secret identity” to bring our Batman an autographed photo.

He accidentally left his sunglasses behind, so when he came back for them the next day, he brought a Batman book for our Batman. What a guy! 🙂

As always, I’d love to have you join me on all of my “Journeys Through Life!” Just go to the subscription box at the top of the blog, enter your email, and you’ll always know when there is something new.

We also have a Facebook page, and would just love to have you visit and give us a “like!”