Learning About Science From WriteBonnieRose {Review}

We like to add fun subjects like science to our summer studies so I was excited to receive Learning About Science Collection, Level 3 (Cursive) from  WriteBonnieRose!

I have done one other review of a WriteBonnieRose publication, you can read it here.

“The Artist” is my most enthusiastic science kid, so I was certain he would enjoy doing Level 3 of the Learning About Science Collection. I let him look over the options once we received our download for the purpose of this review, and he decided he wanted to begin with Life Science: “What’s Going On Inside Plants?’

Other topics in this series include:

Also included in our download is a four page pdf with a goodly amount of categorized web links to add in when we want to find out more in a given topic.

Each one of the “workbooks” from WriteBonnieRose is around 20 pages in length. They can be printed out and used as worksheets, bound together as a book, or simple stapled in a top corner, as we did. Eventually, we will remove the staples, and then either 3-hole punch to put all together in a notebook or maybe I will take them to be spiral bound as a complete book.

As I said above, “The Artist” was interested in starting with “What’s Going On Inside Plants?” workbook. I am very impressed at what he was able to learn that he didn’t already know from it! A few evenings ago, for some reason the topic of fungi came up at supper (you just never know what you will be discussing at supper when you have a bunch of boys! 🙂 ) I said that i thought maybe moss was a fungus, and “The Artist” immediately said no, moss is a non-vascular plant. When I asked him how he knew this, he said “I learned it from WriteBonnieRose! Here is the page that he was referring to:

Here is the cover of the workbook “The Artist” has been focusing on:

I did manage to get one picture when he was actually working on, and coloring the workbook pages:

One thing we really appreciate is that these are labeled as “levels,” as opposed to grades. My kids are age-wise older than the third grade, but they have different levels of abilities depending on their individual delays. This was perfect for “The Artist,” because he loves science, and he absolutely prefers to learn in bite sized chunks. 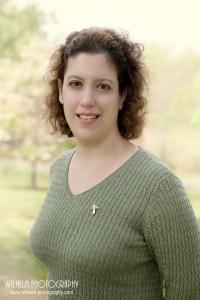 Bonnie Rose is a writer. She was never homeschooled, and never had any children. She ended up writing for the homeschool community because she loves children, and is a supporter of homeschooling. Another author suggested that she go to a homeschool convention, where she picked up a free copy of The Old Schoolhouse Magazine. She ended up volunteering to write for Schoolteachers.com, an educational website developed by The Old Schoolhouse Magazine.

Bonnie Rose is an excellent writer of educational materials, and I very much recommend her!

To read about what my fellow crew members think about this and other levels of Learning About Science Collection, please click on the banner just below!

The Digital Science Online: Elementary Edition (Grades K-5), is divided into two sections. One is primary, which would be the grade K through 2 collection. This included well over 50 units of study, contained within the following subjects: physical, earth, life, and health. This is a great section if your children are in that age/grade range, there are tons of beautiful videos, animations, photos, and activity sheets, etc.

WE did not use this section, because my kids were beyond it, for the most part, but I really wanted you to know that it is there, and that it’s GOOD.

We HAVE been using the elementary a lot, because, frankly, I thought it was the best way for us to work as a group, something which many of my readers know that we enjoy doing. The elementary section of Digital Science Online has subjects like physical, earth, and life, with subtopics or units within them. As with the Primary section, there are lovely, well made videos, animations, photos, worksheets, and hands on activities in some areas. It’s meant for grades 3 through 5.

We have, for the most part, enjoyed this, except for having to crowd around one computer (something I will also address a little later). It was very impressive how, when we would choose a subject, there would then be a list of sub-topics within that subject, effectively giving us a unit study, already all organized for us! The reason I like this aspect so much is that all four of my boys really, really enjoy watching science and nature programs on television. The problem with that though, is it’s hard to put together a group of programs at the same time which would work together as a topical unit.

Eventually, though, with the exception of “The Puzzler”, the boys really wanted to have a go at the higher level, which I’ll talk about in a bit, because truthfully, I thought only “The Artist” would be able to handle the Digital Science Online: Secondary Edition (Grades 6-12).

How wrong I was!

As I mentioned back at the beginning of this review, we were also given access to the Digital Science Online: Secondary Edition (Grades 6-12).

The Secondary Edition has considerably more units of study, with a great number of sub-topics. My kids liked the longer videos, which, once again, I must complement. They are quite beautiful.

I have asked them to stay away from some sections of the biology units, after they pointed them out and said they didn’t think they should look at them. I was very proud of them for this actually, as it shows they have been listening to us and to their teachers at church when we discuss what is or is not appropriate for them.

There are also areas in which evolution is used as a given, where we believe, and teach, from a Creation world view. It was very interesting, however, to listen to everyone of our boys, at different times while watching different sections, saying things like “That’s not true, there’s no millions of years” or “Evolution isn’t real, we know that”. 🙂

The Secondary Edition also has worksheets and such, but these are really beyond any of my boys other than “The Artist”. I DO find that “The Batman” and “Mr. Loquacious” can do a lot of them orally, though.

AS I told you above, I really thought it would be better to use this program as a group, because as often as possible, I prefer it when we can do that. This DID work, for a while, but lo and behold, just today, they asked me two questions:

Will this work on our tablets?
Can we do it separately so we can choose our own topics?

Well, guess what, it works on the tablets! I hadn’t even tried, because I’m used to things like this being mostly for iPads, which we do not have. WE have Android Tablets. SO, I told them I would try it on mine first to check, and if so, we’d see if it would work on theirs. It did! 🙂 Since I had never actually set up separate student accounts because I thought my kids would love to do this together, I chose to call customer support, given that I had forgotten how to set up separate log ins. Guess what found out? Well, while yes, I CAN do that, I don’t HAVE to! They can all log in using the information I used for the one log in, and they can all do it at the same time, on their own tablets or a computer. YAY! The customer service is wonderful. The first person I spoke with was named Louise, and the second was Emily, because they handle different aspects within the company.

One of the reasons I was so pleased to discover that this could be used on their tablets, all at the same time, and that they could be doing different subjects at the same time, as well, is that now, we don’t have to have a “discussion” about what we will learn about “today”. Being able to use the tablets in this way is a definite plus as well for the family who travels, because their children will be able to take this beautiful program along, and learn science their way. It would be great if you’re staying somewhere with provided wifi, and much better than spending all your in room time just watching television.

ALL in all, we really, really like this program. I even had one child come back inside from playing to ask if he could do some more science on his tablet! What better rating is there than that, right?

Want to see what my fellow Crew members think of Digital SCience Online? Just click on the banner right below!

As always, I would just love it if you joined me on all of “My Journeys Through Life”! Just go to the “sign me up” button at the top of the blog and enter your email information. You will then be notified whenever their is an update! 🙂 END_OF_DOCUMENT_TOKEN_TO_BE_REPLACED