Tag Archives: all about me

Once a month, some of the moms from our church get together at a local restaurant for a little “Mom’s Night Out”. Last night, 3 of us went to a place we all enjoyed, Dion’s. Funny thing, all three of us were pretty good, and stuck to salads, like the delicious Chef Salad I chose! I got the medium size salad, knowing I would be taking about half of it home with me. It will be my supper tonight! 🙂

Our Mom’s Night Out times are so important! Even though it’s only a couple of hours out of the month, it’s a time when we can connect, talk, and just enjoy the company of other women, while our husbands stay at home and hang out with the kids! This is something I did not have back in Michigan, and I’m very grateful for it now! We’ve already scheduled our November Mom’s Night Out! 🙂

If you aren’t doing one of these every month, I encourage you to get a group going. It’s very good for we ladies to have this, and it’s good for our families, too!

As always, I’d Love it if you join me on all of “My Journeys Through Life”. Just enter your email information in the “sign me up” button at the top of the blog, and please, do go and “like” our Facebook page here. Never miss another update!

I decided to do this now, because tomorrow, Sunday, is generally very busy for me, and really, it IS the 20th of October in the eastern time zone, right? 🙂

So, tomorrow, I have to get up very early, because I’m in the choir, and the choir is singing special music tomorrow, so we need to be at church no later than 8:30 a.m. for our practice and sound check. We live a good distance from church, so we will need to be pulling out of our driveway absolutely no later than 7:45 a.m., though even earlier would be good, lol!

My husband Mike will drop me at church, then go off to get a coffee at McDonald’s, before coming back with the boys.

We love our church, and we’re so glad to be part of it! I am in the choir, I also sing special music occasionally on my own, and I serve in the nursery and the Care Bear ministry (taking meals to people when there’s a need). My older boys are in teen choir, and they also have ministered by being part of the teen group which runs the summer program for the littles, it’s called UTX (Under The Cross). My younger boys are in the Sunshine Kids Choir, and my husband serves in the sound booth.

We love it here, and we know we are meant by God to be here! 🙂

If you live in the Albuquerque, NM area, or you will be visiting the area, I encourage you to come and visit, I know you won’t regret it! For more information, including how to find us, please go here.

As always, I would love it if you join me on all of “My Journeys Through Life”! Just enter your email information in the “sign me up” button at the top of the blog, and never miss an update again! Oh, and please, go and “like” our Facebook page, here. I sure would appreciate it! 🙂

I Have Just the BEST Hairstylist in Albuquerque!

I know I posted a while back, when I first found a new hairstylist finally, after moving to New Mexico, and having to give up C.J., the fantastic lady who cut and colored my hair back in Pt. Huron, MI, but I’m writing about Jody Muniz again, because she has left the salon she was working for and gone out on her own!

I was finally able to get in to see Jody this past Saturday, July 20, 2013, after being unable to go for the whole time I’ve been recovering from surgery on five toes, and boy, was it beyond time to go!

As you can see, it’s WAY past time for a color and trim! Jody and I got right to work deciding what to do about color this time, and we decided to go with a lighter base, and stick with that from now on (probably), just changing up the accent colors that she puts in each time. That way, if I need to, I can go a little longer between appointments, because the golden blonde base will blend with any new growth. For the other colors as high and low lights, she used a chocolate color and a lighter blonde.

My hair has been really coming back nicely (finally) since my bariatric surgery, and as you can see, it takes a ton of foils to do the high/low lights!

It’s more than worth it though, for the end results! Here is an “after” picture of me, with my wonderful stylist Jody! 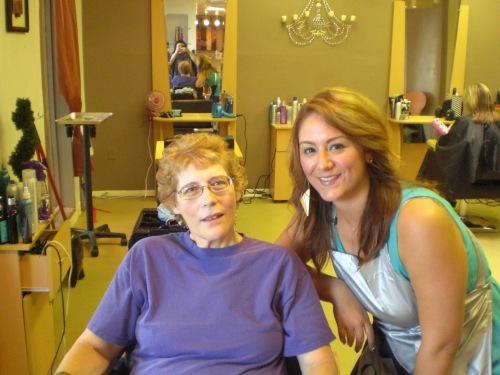 I’m so thankful to my husband . . . since I’m not yet driving after my surgery, he and the boys (all four of them!) took me to my appointment, which was at 9:30 a.m., meaning we needed to leave our house at about 8:45 a.m. (this is a BIG city, and you just never know about traffic!), and then he took the boys to McDonald’s, to get THEIR hair cut, and to a park while waiting for me to be done, about three hours later. Wasn’t that nice of him? 🙂

If you are in the Albuquerque, NM area, and want to have a wonderful, pampering, just for you time, and come out looking great, you can contact my stylist, Jody Muniz through Genesis Hair Studio, or you can contact her directly at (575)993-4972. I promise, you won’t regret it!

Tagged as Albuquerque, all about me, Bariatric Surgery, hair stylist, weight loss 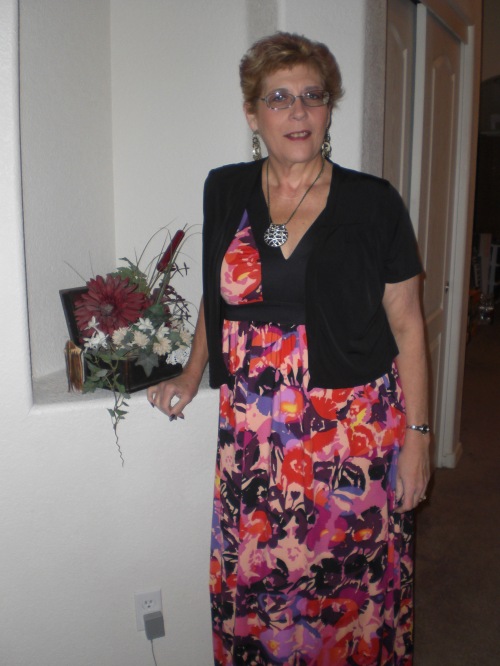 . . . because I wanted to prove that I can, in fact, style my own hair when I’ve gotten a perfect cut! 🙂

Filed under just me

Tagged as all about me