OK, so I’ll be honest, back in the beginning of August, when I requested to be chosen as a reviewer for The Presidential Game,

it was primarily because it looked so interesting to ME. I love to follow politics. I have, however, been trying over the years to teach my boys about elections, and several years ago “The Batman” and “The Artist” even did a lapbook about the presidential election (this was before we adopted “Mr. Loquacious” and “The Puzzler”, so we’ll probably do it again during the next big election”).

When the game arrived and I got a good look at it, I got a little nervous, I was at that point unsure if my boys would be able to “get” the concept during game play. I also wondered about the price, and what my husband would think of that. More about that later, however. 🙂

The Presidential Game is a board game, with an online component. The game itself is VERY sturdy and well made! I’ve seen (and had!) a number of board games which were very cheaply made, the fold up boards coming apart, the boxes coming apart. The Presidential Game is going to stand up to a LOT of wear, I think, which is a good thing, because my family is enjoying it very much!

I told you that at first, I was unsure whether my boys would be able to “get” the process of playing this game, because of their various special needs. I guess my friends who keep reassuring me about what home-schooling is doing for them are right though, because it didn’t take very long at all for all four of the boys to start strategizing to try to win the game.

The Presidential Game is intended for players age 11 and up, and for at least two players. We are a family of six, and play it in teams of three players.

This is from the back of the box:

“Think you have what it takes to be America’s next president? The Presidential is a fun and exciting game of strategy where two teams, Democrats and Republicans, battle for control of each state to ultimately gain 270 electoral votes or more. An entertaining and educational family game – it’s great for both students (11+) and adults. Enjoy the thrill of playing to win the most powerful job in the world!”

When your game arrives, it will include the following in the box:

Using the interactive webmap calculator was great fun, it helped the boys catch on very quickly to how fast and frequently the lead can change during an election campaign! 🙂

The very first time we set up for play, it took only a few minutes to get started, and the learning curve was slight, much easier than I had thought it would be, as I said above. We played as two teams. My husband, “The Batman” and “The Puzzler” were one team, with “The Artist”, “Mr. Loquacious” and myself being the other. 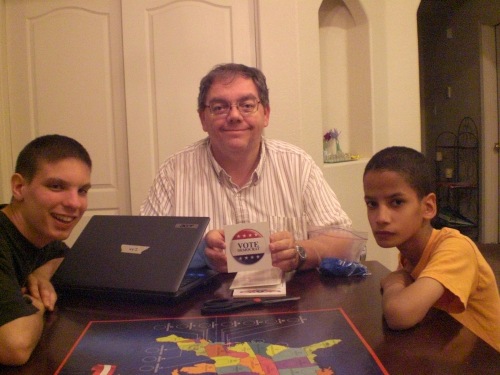 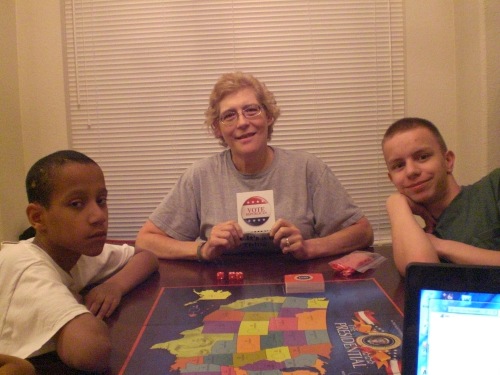 We got right into the game, which is played as a series of campaign “weeks”, where each team is either fundraising or campaigning. We decided to alternate. Week one (the first found) we decided both teams would fundraise, and on week two (round two) we would campaign, and so on through the game. In your fundraising round, you must choose which one of four states (California, Texas, New York or Florida) you will be going to in order to raise money. You then get to roll your three dice. Whatever your total roll, one half of that number must remain in the state where you chose to fundraise, so for example, if you roll a 12, then 6 votes (chips) in your color are stacked onto that state. You may, of course, put all 12 on your chosen fundraising state, or you can divide the other half between any other states you like. That’s when strategy begins to kick in, because sometimes you can regain a state your opponents control, or gain a new state.

The politics cards are fun! Your team gets to draw a politics card from the deck during your fundraising turn. Most of the cards can be used right away OR held to play later, although some will say “play immediately” on them. You can use only one card during a turn, though, so it won’t help to hold a bunch in order to get extra votes! Here is a politics card that my team drew, and used. I thought it was hilarious, because we are originally from Michigan, and the topic on the card was very much in the news during a political scandal in Detroit only a few years ago. 🙂

The counts on the board change frequently, as votes (chips) are stacked on states and taken away because the other team gained or re-gained that state. 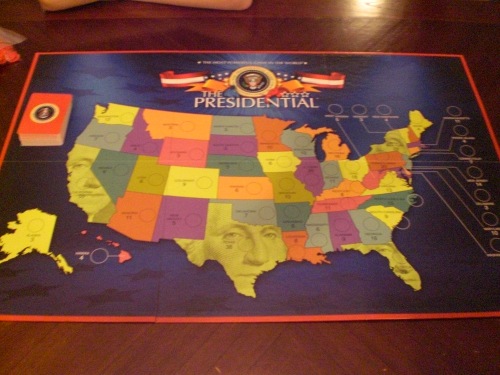 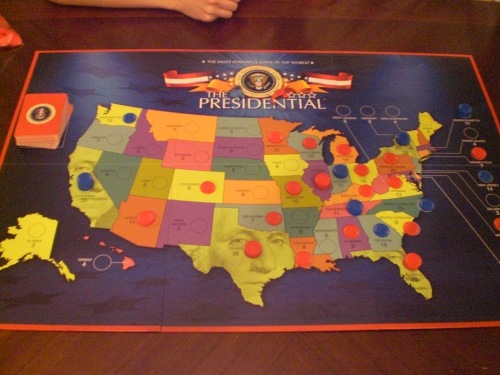 As you play, you can keep score of the electoral votes gained by each team either by using the score pad (a lot more work!) or by using the online Electoral WebMap Calculator (a lot more fun!) The online map is visual, and the boys could see immediately how quickly things change and turn around during an election, because at any time during play, states were being won and lost.

This is what the Electoral WebMap looked like when we started the game . . . 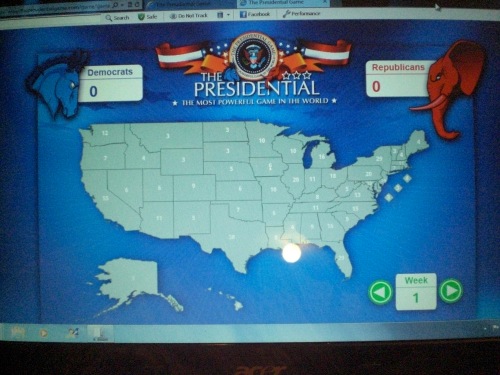 And these shots will show you how quickly things can change during a campaign! 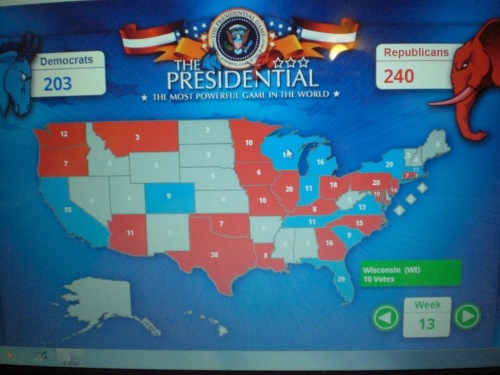 It really didn’t take very long for any of the boys to pick up on the strategy of the game, and they got very good, very quickly, at figuring out which states to fundraise and campaign in, and how to best allocate votes (chips) in order to either take over a state or at least turn it neutral again, if the opposite team currently controlled it. 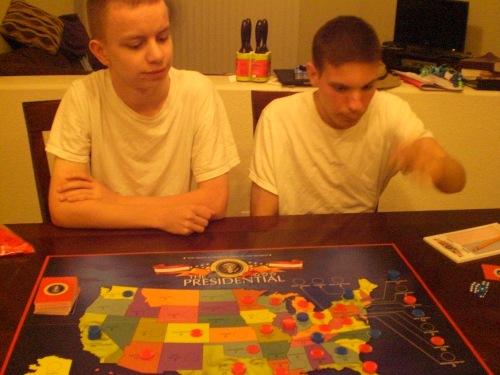 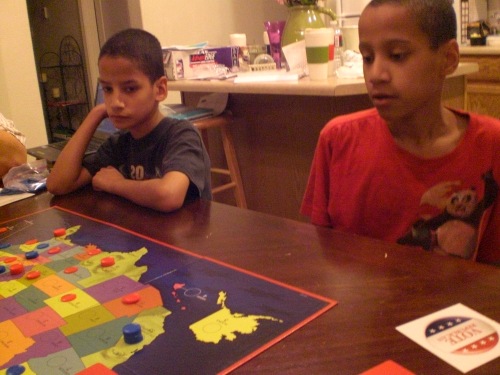 The Presidential Game is available to purchase here for $35.00, which both my husband and I feel is a good price, especially considering the online component.

Our family is truly enjoying this game, and will absolutely put it into the family game night rotation!

To read about what other members of the Schoolhouse Review Crew thought of the Presidential Game, please click the graphic below!

As always, I would love it if you would join me on “My Journeys” by clicking on the “sign me up” button at the top of the blog. Just enter your email, and never miss an update again! 🙂