Venturing With God in Congo {Review}

(Disclaimer: I received a FREE copy of this product through the HOMESCHOOL REVIEW CREW in exchange for my honest review. I was not required to write a positive review nor was I compensated in any other way.)

We have been reading Venturing with God in Congo by Darrell Champlin from Conjurske Publications together,  and really enjoying it. As we just recently held our annual Missions Conference, we were so happy to receive this book for review!

Darrell Champlin and his wife Louise. Louise had grown up in the Belgian Congo of Africa, in a family which had most members had gone to the mission fields. He had written this book in parts, and after his death his wife Louise compiled it into this non-fiction missionary account.

Let’s begin with the quality of this book. This is a good quality, hardcover book. Since I like to add books which will last into our home library, this was important to me. The cover art is amazing! I am showing you both the front and back covers. so you can see how beautiful Congo was to the Champlin family. 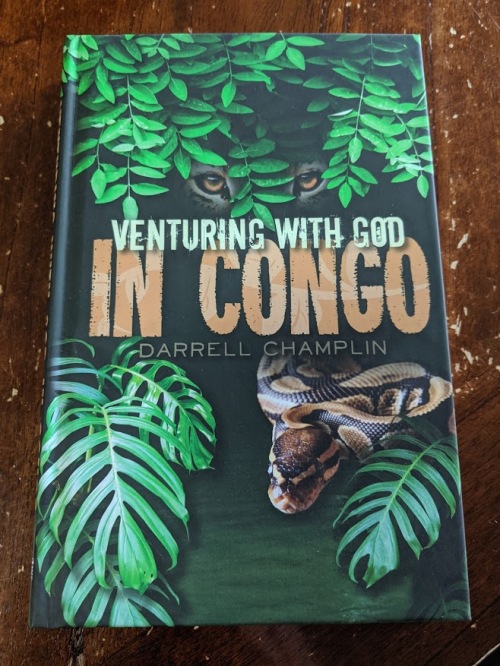 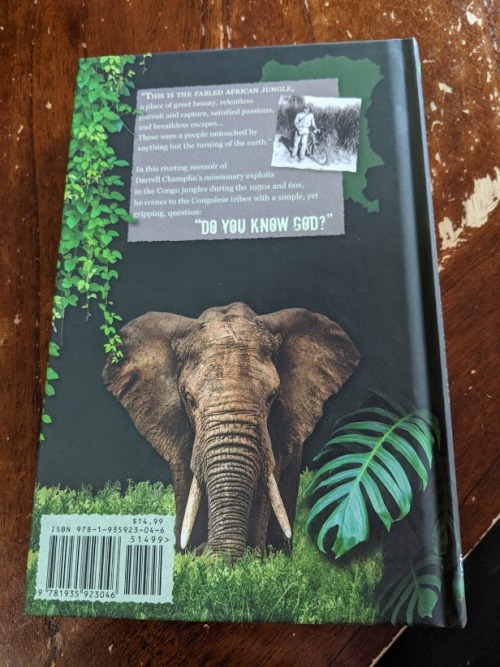 This book is 290 pages long, and has included pronunciation tips several times throughout the book, along with a short page at the beginning. There is an eight page gallery of photos taken during the span of this story which were fun to look at.

There is scripture used throughout, and those who read this blog regularly will know how please I was to see that all of the scripture used was from the 1611 King James Version.

We belong to a very missions minded church, so this sort of book is always a treat for me. As I said above, we just finished up our Missions Conference, and this was an excellent way to extend it!

The personal sacrifices made by missionary families are daunting, but God calls us all to be missionaries. For many, the call is to “go.” For those who are not called to go, we must send. Missionary giving is so important, so that we become part of spreading the  Word of God and need for salvation throughout the world.

Some of the things given up by the Champlins were modern life, financial security, and safety, among others. They lived on very little in the Congo, $28.00 per month! The rest of their $128.00 of support went into the actual ministry. They gave up modern life because the people they were reaching were living as if it were 100 or more years in the past. They lived in a jungle home, where the windows were just openings and couldn’t be closed, where people or animals could enter at will, so there was much danger.

Darrell Champlin has written the most vivid descriptions of the wild life and the people in Congo, I could actually visualize it! The incredible stories of thise who came to Christ should bring anyone who doesn’t know Him straight to their knees.

One such story (my favorite, actually) gives an account of a man called Lulu Bekanga. This man struck terror into the hearts of the people. He had been raised with witchcraft and satan worship. Now, as an adult, he was working as a head policeman for a territorial Belgian agent, terroriging the villagers. When Champlin began his very first service in the Congo, Lulu Bekanga shouted “The first person in this village who believes in this Jesus, I personally will bury!” God works, though, because the first person to accept Jesus as savior was a nephew of Lulu’s, and in his culture he was forbidden to kill a family member. In another of God’s miracles, Lulu Bekanga was the second person their to accept The Lord Jesus as his Savior! At his baptism, he asked to take a new name, and chose Bekanga Paul after Paul in the New Testiment. Thus, like Saul the persecutor of Christian became Paul the messager of The Lord, Lulu Bekanga the murderer became BeKanga Paul, seeking souls for The Lord.

Learning about this missionary family, their work, and the people they served for The Lord was inspiring to me. Through this book, I was pricked in the heart about missions giving. It may do that to you, but read it anyway! It is a fascinationg read, and you’ll be better for it, in my opinion.

I very highly recommend Walking With God in Congo. I do suggest reading ahead before reading each chapter to younger children, as he doesn’t sugar coat the lifestyles of the people. There is much promiscuity in the lives of the people, and no knowledge of right and wrong in that area when the missionary family arrives. I think teens can handle this, but use it as a discussion and teaching point.

Please check out 63 other fair and honest reviews by clicking this banner:

Filed under Missionary Stories, Walking With God in Congo

Tagged as Missionary Stories, Walking With God in Congo