I’ve been trying to let my boys do more arts & crafts, so I was  very happy to have been given the Mega Pack of Super Beads from Zirrly for the purpose of this review.

Although at least a couple of my kids have done projects away from home with fuseable beads, I had never seen anything other than the finished projects, so I was very interested in a kit where I really only had to supervise, no ironing involved.

It was an exciting time when the package came! I had to hurry to be able to even get a picture when it was discovered what was in the box the day it came in the mail. 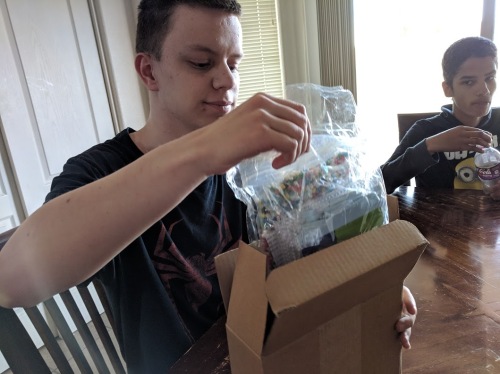 The Mega Pack of Super Beads comes with 4500 beads in various colors plus a small bag of orange beads and a small bag of black beads, both of which are needed for the project designs included in the package. Also included:

The beads are non-toxic, but it does say in the instructions to wash the hands well after use. I’d be interested in knowing what it is that causes them to fuse together in water. Speaking of which, it also says to keep your hands dry while working. We found out why fairly quickly. “The Batman’s” hands sweat badly when he is working on something, especially something detailed. His beads began melting a bit in his hand, and he needed help from his brother to finish his apple. This does make me wonder, what happens if at some point their finished projects get wet?

The beads are very small, and with my (very bad) vision, I had trouble doing this craft. There is a small line in each bead which is meant to be facing up when you put it onto the design board, and I seriously could not find it most of the time. My kids had no trouble finding it, but then they don’t have cataracts. 🙂 I did give up and just enjoyed watching them having fun.

So. How to use this product. As I said before, there are four design boards and four cardboard designs for the pre-designed projects. This part is so easy! The cardboard designs have scored lines on them so that they can be folded to snugly fit into the underside of the design board. Since you can see right through the board, this makes it very easy to see where each bead, in which color, goes where. Here are “The Batman,” “The Puzzler” and “The Artist,” working on their chosen pre-designed projects.

As you can see, the design clearly shows through! Once they were finished, we placed the boards on a pad of paper towel and sprayed with the water. This is apparently a guesstimate as to how much is too much water and how much is not enough, but we actually got it on the first try. I forgot to get a picture of this part.

There is a small tool included which in addition to being helpful when a bead is placed in the wrong spot, is also used to remove the finished design after it dries.

Their projects came up easily! Here are the finished pre-designed projects: 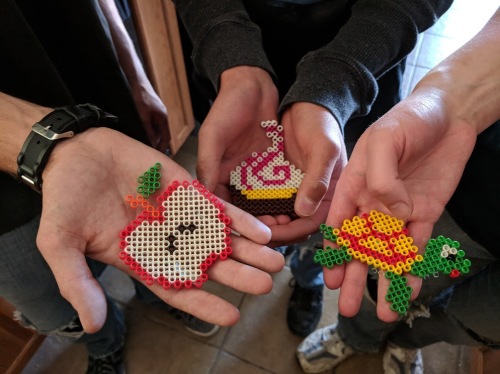 Then, “The Artist” said he wanted to “freestyle” his own design and make a fire-breathing dragon. 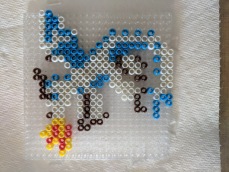 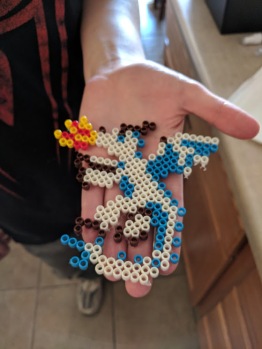 I think it came out really well!

My boys are loving Zirrly Beads! I am frequently seeing them, especially “The artist,” working on something, which makes me very glad we were given the Mega Pack!

Other Homeschool review Crew members reviewed a variety of projects from Zirrly in addition to the Mega Pack:

They all look like a lot of fun to me!

To read 100 fair and honest reviews of Super Beads from Zirrly written by my fellow Homeschool Review crew members, please click on the banner right below!

One response to “Super Beads From Zirrly . . . Review”